Generate your APA references for free

The Oxford University Standard for the Citation of Legal Authorities (OSCOLA) is a referencing style used by students and academics in law.

OSCOLA referencing places citations in footnotes, which are marked in the text with footnote numbers:

A citation footnote appears whenever you quote from, paraphrase or otherwise refer to the content of a source in your text.

A footnote is marked in the text with a footnote number, which appears at the end of the relevant sentence or clause. The number is displayed in superscript (i.e. 1) and appears after any punctuation like a comma or full stop:

These footnotes contain full information on the source cited. The format in which you present this information varies according to the type of source; examples are presented in the following section. A footnote always ends with a full stop:

To save space in OSCOLA citations, abbreviations are used for the names of various publications and legal bodies.

For example, ‘UKSC’ is the United Kingdom Supreme Court, and ‘Cr App R’ refers to the Criminal Appeal Reports.

A full, searchable index of these abbreviations can be found here.

In OSCOLA referencing, referring to a specific page number within a source is called pinpointing. To pinpoint, simply include a page number at the end of your reference, in addition to any page numbers already included.

For example, in the following citation, the first number refers to the page on which the report begins, while the second number pinpoints the passage you’re referring to:

Note that if you’re pinpointing a judge’s comments within a case report, you include the name of the judge, and some special terms and abbreviations are used in the citation and in the text.

OSCOLA uses a system of cross-referencing to save space when you repeatedly cite the same source. This means that for subsequent references of a source, you don’t have to repeat the full citation.

When you refer to the same source you have just referred to (i.e. when the previous footnote was also about that source), you can simply use ‘ibid’ (Latin for ‘in the same place’):

In this example, the second footnote also refers to Davis v Dignam, but to page 522 instead of page 519.

When the previous reference to the source was in an earlier footnote (i.e. when other citations appear in between), use the author’s last name or the title (shortened if it’s a longer title), followed by the number of the previous citation (in brackets and preceded by ‘n’), then the page number you’re pinpointing (if different than the first citation):

OSCOLA provides formats for a variety of source types. The most common ones are covered below.

When citing a case, you’ll usually begin with a neutral citation – a way of referring to the case that does not relate to a particular report – and then give the details of the report afterwards. If no neutral citation exists, as with cases before 2002, you can just begin with the report.

Additionally, note that the year (for the report) is displayed differently depending on whether it is essential to the citation. For reports where each year is also identified with a volume number, the year appears in normal brackets. For those where multiple volumes appear in one year, the year appears in square brackets.

Use a short version of the title if the full title is longer than three words. If necessary, refer to specific parts of an Act of Parliament using section, subsection and paragraph numbers.

Statutory instruments (SIs) are numbered consecutively throughout the year; it’s this number that appears at the end of the citation – the example below is the 149th SI of 2020.

House of Commons bills are cited slightly differently from House of Lords bills. You write ‘HC Bill’ or ‘HL Bill’ depending upon which house it is, and bill numbers for Commons bills appear in square brackets.

Hansard is the official transcript of parliamentary debates in the UK. As with bills, write ‘HC’ for the House of Commons and ‘HL’ for the House of Lords. ‘Deb’ is short for ‘debate’, ‘vol’ for volume, and ‘col’ for column.

Use the full name of the author(s) as written in the source. List the edition (abbreviated to ‘edn’) when it is stated on the title page. Note that OSCOLA recommends abbreviating ‘Oxford University Press’ to ‘OUP’; this is not the case with other publishers.

Certain older books are listed by OSCOLA as ‘works of authority’ and given special abbreviated citations. For example, the following is a citation of volume 3, page 75 of Blackstone’s Commentaries on the Laws of England:

OSCOLA provides a list of these abbreviations in their full guide, section 4.2.3.

In a longer work, such as a thesis or dissertation, OSCOLA requires you to include tables listing any cases and legislation you cited, as well as a bibliography listing any secondary sources. For shorter essays, this is usually not necessary, but do check your institution’s guidelines.

The tables and bibliography appear at the end of your text. The table of cases comes first, followed by the table of legislation, and then the bibliography.

Sources are listed in alphabetical order within each table and in the bibliography.

Cases are written in a similar format here and in the main text; the only difference is the names of the parties involved are not italicised in the table of cases:

A bibliography lists all your secondary sources – that is, everything other than cases and legislation. For example, here you would list Hansard, any books and journal articles cited, and other sources such as blogs, social media and newspapers.

Bibliography entries differ from citations in terms of their presentation of the author’s name. Author names in the bibliography are inverted, and initials are used in place of the first name:

How to Avoid Plagiarism | Tips on Citing Sources

Avoid plagiarism by keeping track of the sources you use, quoting or paraphrasing them properly, and citing them correctly.
23

To reference in Harvard style, cite the author and year directly in the text, and list full source details in a reference list at the end.
670

In Vancouver style, sources are numbered in the order they are cited. A number is given in the text and full references listed at the end.
146

Hi Jack! I have a follow-up question about the bibliography relating to the place of the comma when there are more authors.

Thank you in advance! Best, Kirsten

Commas are not used before 'and' in OSCOLA bibliographies, but there is a comma between the first two authors in a list of three. For example: 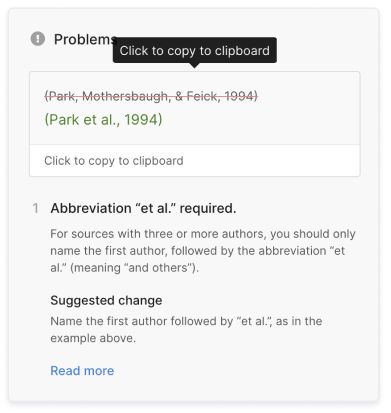