In an experiment, an extraneous variable is any variable that you’re not investigating that can potentially affect the outcomes of your research study.

If left uncontrolled, extraneous variables can lead to inaccurate conclusions about the relationship between independent and dependent variables.

Why do extraneous variables matter?

Extraneous variables can threaten the internal validity of your study by providing alternative explanations for your results.

Uncontrolled extraneous variables can also make it seem as though there is a true effect of the independent variable in an experiment when there’s actually none.

A confounding variable is a type of extraneous variable that is associated with both the independent and dependent variables. 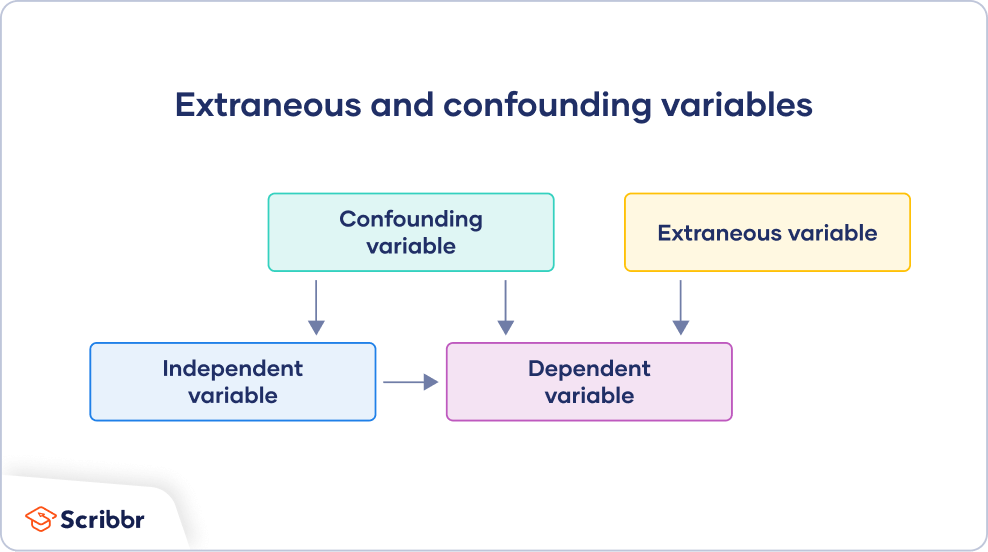 Types and controls of extraneous variables

Demand characteristics are cues that encourage participants to conform to researchers’ behavioural expectations.

Sometimes, participants can infer the intentions behind a research study from the materials or experimental settings, and use these hints to act in ways that are consistent with study hypotheses. These demand characteristics can bias the study outcomes and reduce the external validity, or generalisability, of the results.

You can avoid demand characteristics by making it difficult for participants to guess the aim of your study. Ask participants to perform unrelated filler tasks or fill in plausibly relevant surveys to lead them away from the true nature of the study.

Experimenter effects are unintentional actions by researchers that can influence study outcomes.

There are two main types of experimenter effects:

To avoid experimenter effects, you can implement masking (blinding) to hide the condition assignment from participants and experimenters. In a double-blind study, researchers won’t be able to bias participants towards acting in expected ways or selectively interpret results to suit their hypotheses.

Situational variables, such as lighting or temperature, can alter participants’ behaviors in study environments. These factors are sources of random error or random variation in your measurements.

To understand the true relationship between independent and dependent variables, you’ll need to reduce or eliminate the effect of situational factors on your study findings.

To prevent situational variables from influencing study outcomes, it’s best to hold variables constant throughout the study or statistically account for them in your analyses.

A participant variable is any characteristic or aspect of a participant’s background that could affect study results, even though it’s not the focus of an experiment.

Since these individual differences between participants may lead to different outcomes, it’s important to measure and analyse these variables.

What’s the difference between extraneous and confounding variables?

An extraneous variable is any variable that you’re not investigating that can potentially affect the dependent variable of your research study.

What are the types of extraneous variables?

There are 4 main types of extraneous variables:

Why are control variables important?

Control variables help you establish a correlational or causal relationship between variables by enhancing internal validity.

If you don’t control relevant extraneous variables, they may influence the outcomes of your study, and you may not be able to demonstrate that your results are really an effect of your independent variable.

What does ‘controlling for a variable’ mean?

‘Controlling for a variable’ means measuring extraneous variables and accounting for them statistically to remove their effects on other variables.

Pritha has an academic background in English, psychology and cognitive neuroscience. As an interdisciplinary researcher, she enjoys writing articles explaining tricky research concepts for students and academics.

Variables can be defined by the type of data (quantitative or categorical) and by the part of the experiment (independent or dependent).
New

What Are Control Variables | Definition & Examples

A control variable is anything that is held constant in a study to prevent it from interfering with the results.
New