When you conduct research about a group of people, it’s rarely possible to collect data from every person in that group. Instead, you select a sample. The sample is the group of individuals who will actually participate in the research.

To draw valid conclusions from your results, you have to carefully decide how you will select a sample that is representative of the group as a whole. There are two types of sampling methods:

You should clearly explain how you selected your sample in the methodology section of your paper or thesis.

First, you need to understand the difference between a population and a sample, and identify the target population of your research.

The population can be defined in terms of geographical location, age, income, and many other characteristics. 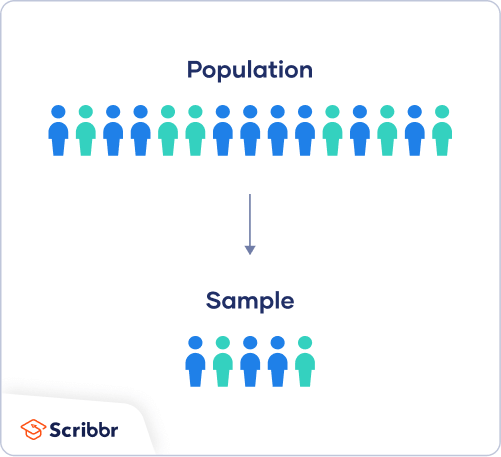 It can be very broad or quite narrow: maybe you want to make inferences about the whole adult population of your country; maybe your research focuses on customers of a certain company, patients with a specific health condition, or students in a single school.

It is important to carefully define your target population according to the purpose and practicalities of your project.

If the population is very large, demographically mixed, and geographically dispersed, it might be difficult to gain access to a representative sample.

The sampling frame is the actual list of individuals that the sample will be drawn from. Ideally, it should include the entire target population (and nobody who is not part of that population).

You are doing research on working conditions at Company X. Your population is all 1,000 employees of the company. Your sampling frame is the company’s HR database, which lists the names and contact details of every employee.

The number of individuals you should include in your sample depends on various factors, including the size and variability of the population and your research design. There are different sample size calculators and formulas depending on what you want to achieve with statistical analysis.

There are four main types of probability sample. 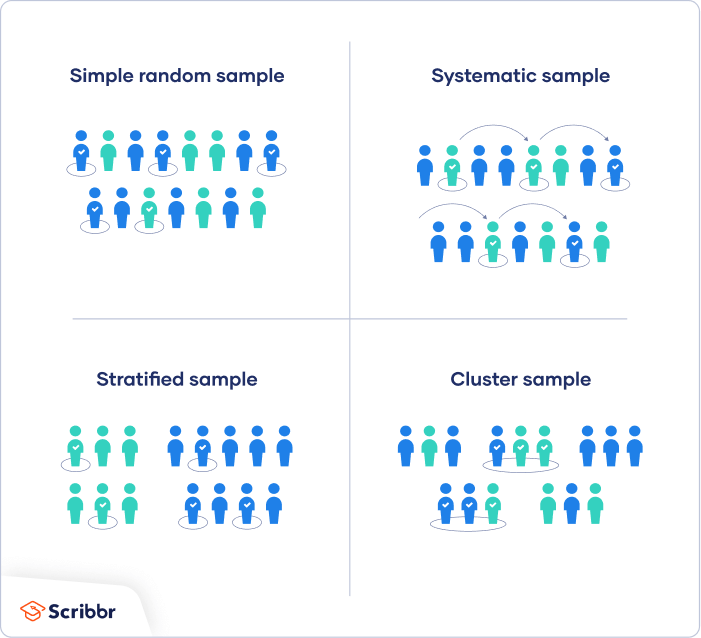 In a simple random sample, every member of the population has an equal chance of being selected. Your sampling frame should include the whole population.

To conduct this type of sampling, you can use tools like random number generators or other techniques that are based entirely on chance.

You want to select a simple random sample of 100 employees of Company X. You assign a number to every employee in the company database from 1 to 1000, and use a random number generator to select 100 numbers.

Systematic sampling is similar to simple random sampling, but it is usually slightly easier to conduct. Every member of the population is listed with a number, but instead of randomly generating numbers, individuals are chosen at regular intervals.

All employees of the company are listed in alphabetical order. From the first 10 numbers, you randomly select a starting point: number 6. From number 6 onwards, every 10th person on the list is selected (6, 16, 26, 36, and so on), and you end up with a sample of 100 people.

If you use this technique, it is important to make sure that there is no hidden pattern in the list that might skew the sample. For example, if the HR database groups employees by team, and team members are listed in order of seniority, there is a risk that your interval might skip over people in junior roles, resulting in a sample that is skewed towards senior employees.

Stratified sampling involves dividing the population into subpopulations that may differ in important ways. It allows you draw more precise conclusions by ensuring that every subgroup is properly represented in the sample.

To use this sampling method, you divide the population into subgroups (called strata) based on the relevant characteristic (e.g., gender, age range, income bracket, job role).

The company has 800 female employees and 200 male employees. You want to ensure that the sample reflects the gender balance of the company, so you sort the population into two strata based on gender. Then you use random sampling on each group, selecting 80 women and 20 men, which gives you a representative sample of 100 people.

Cluster sampling also involves dividing the population into subgroups, but each subgroup should have similar characteristics to the whole sample. Instead of sampling individuals from each subgroup, you randomly select entire subgroups.

If it is practically possible, you might include every individual from each sampled cluster. If the clusters themselves are large, you can also sample individuals from within each cluster using one of the techniques above. This is called multistage sampling.

This method is good for dealing with large and dispersed populations, but there is more risk of error in the sample, as there could be substantial differences between clusters. It’s difficult to guarantee that the sampled clusters are really representative of the whole population.

The company has offices in 10 cities across the country (all with roughly the same number of employees in similar roles). You don’t have the capacity to travel to every office to collect your data, so you use random sampling to select 3 offices – these are your clusters.

In a non-probability sample, individuals are selected based on non-random criteria, and not every individual has a chance of being included.

This type of sample is easier and cheaper to access, but it has a higher risk of sampling bias. That means the inferences you can make about the population are weaker than with probability samples, and your conclusions may be more limited. If you use a non-probability sample, you should still aim to make it as representative of the population as possible.

Non-probability sampling techniques are often used in exploratory and qualitative research. In these types of research, the aim is not to test a hypothesis about a broad population, but to develop an initial understanding of a small or under-researched population. 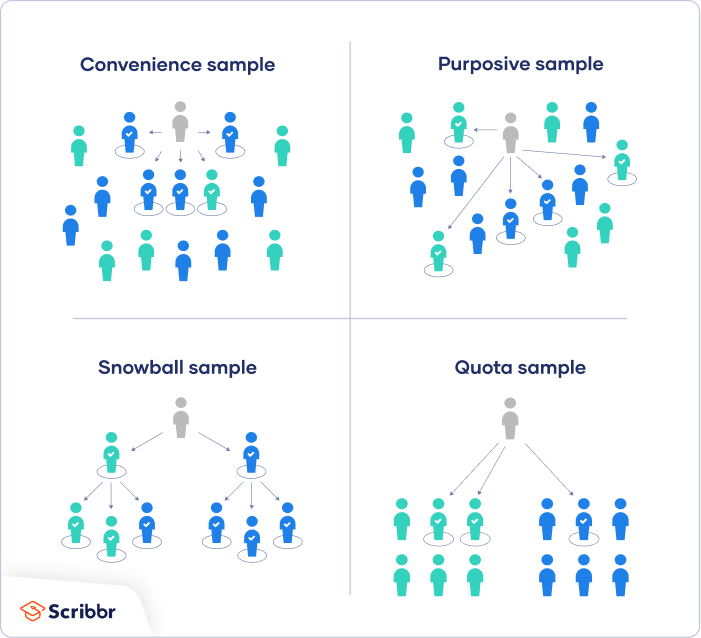 A convenience sample simply includes the individuals who happen to be most accessible to the researcher.

This is an easy and inexpensive way to gather initial data, but there is no way to tell if the sample is representative of the population, so it can’t produce generalisable results.

You are researching opinions about student support services in your university, so after each of your classes, you ask your fellow students to complete a survey on the topic. This is a convenient way to gather data, but as you only surveyed students taking the same classes as you at the same level, the sample is not representative of all the students at your university.

Similar to a convenience sample, a voluntary response sample is mainly based on ease of access. Instead of the researcher choosing participants and directly contacting them, people volunteer themselves (e.g., by responding to a public online survey).

Voluntary response samples are always at least somewhat biased, as some people will inherently be more likely to volunteer than others.

You send out the survey to all students at your university and many students decide to complete it. This can certainly give you some insight into the topic, but the people who responded are more likely to be those who have strong opinions about the student support services, so you can’t be sure that their opinions are representative of all students.

This type of sampling, also known as judgement sampling, involves the researcher using their expertise to select a sample that is most useful to the purposes of the research.

It is often used in qualitative research, where the researcher wants to gain detailed knowledge about a specific phenomenon rather than make statistical inferences, or where the population is very small and specific. An effective purposive sample must have clear criteria and rationale for inclusion.

If the population is hard to access, snowball sampling can be used to recruit participants via other participants. The number of people you have access to ‘snowballs’ as you get in contact with more people.

You are researching experiences of homelessness in your city. Since there is no list of all homeless people in the city, probability sampling isn’t possible. You meet one person who agrees to participate in the research, and she puts you in contact with other homeless people she knows in the area.

A sample is a subset of individuals from a larger population. Sampling means selecting the group that you will actually collect data from in your research.

For example, if you are researching the opinions of students in your university, you could survey a sample of 100 students.

Statistical sampling allows you to test a hypothesis about the characteristics of a population. There are various sampling methods you can use to ensure that your sample is representative of the population as a whole.

Why are samples used in research?

Samples are used to make inferences about populations. Samples are easier to collect data from because they are practical, cost-effective, convenient, and manageable.

What is probability sampling?

Probability sampling means that every member of the target population has a known chance of being included in the sample.

What is non-probability sampling?

In non-probability sampling, the sample is selected based on non-random criteria, and not every member of the population has a chance of being included.

What is sampling bias?

Sampling bias occurs when some members of a population are systematically more likely to be selected in a sample than others.

Shona has a bachelor's and two master's degrees, so she's an expert at writing a great thesis. She has also worked as an editor and teacher, working with students at all different levels to improve their academic writing.

In a controlled experiment, all variables other than the independent variable are held constant.