In a longitudinal study, researchers repeatedly examine the same individuals to detect any changes that might occur over a period of time.

Longitudinal studies are a type of correlational research in which researchers observe and collect data on a number of variables without trying to influence those variables.

While they are most commonly used in medicine, economics, and epidemiology, longitudinal studies can also be found in the other social or medical sciences.

How long is a longitudinal study?

No set amount of time is required for a longitudinal study, so long as the participants are repeatedly observed. They can range from as short as a few weeks to as long as several decades. However, they usually last at least a year, oftentimes several.

One of the longest longitudinal studies, the Harvard Study of Adult Development, has been collecting data on the physical and mental health of a group of men in Boston, in the US, for over 80 years. 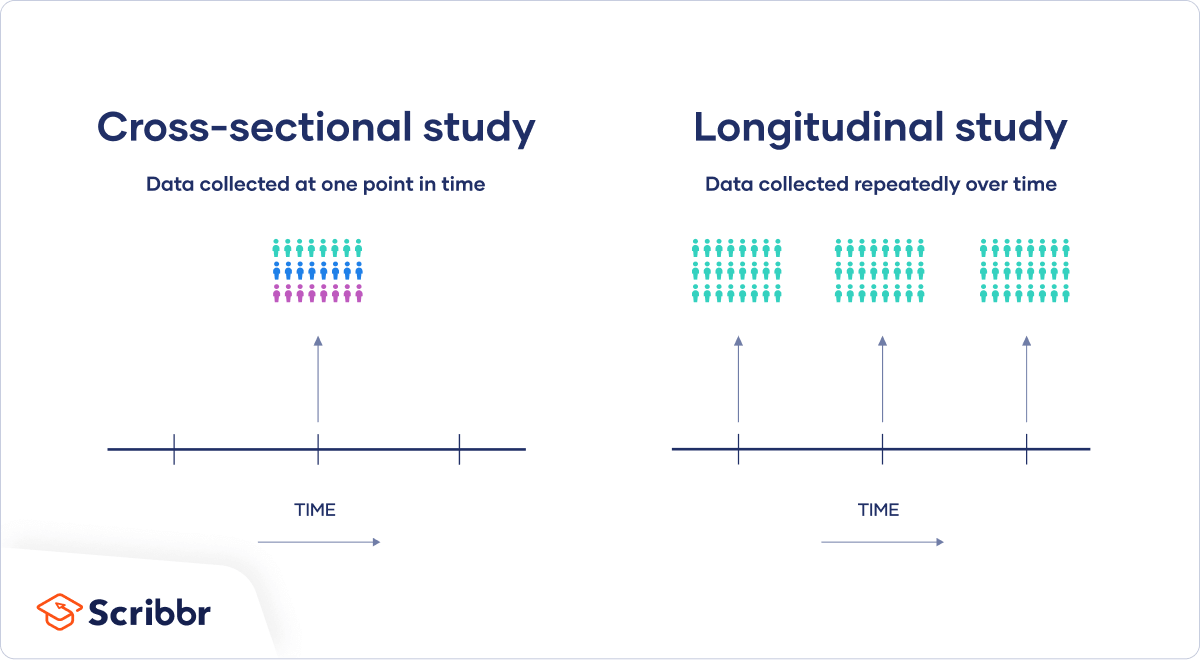 Both types of study can prove useful in research. Because cross-sectional studies are shorter and therefore cheaper to carry out, they can be used to discover correlations that can then be investigated in a longitudinal study.

How to perform a longitudinal study

If you want to implement a longitudinal study, you have two choices: collecting your own data or using data already gathered by somebody else.

Using data from other sources

Many governments or research centres carry out longitudinal studies and make the data freely available to the general public. For example, anyone can access data from the 1970 British Cohort Study, which has followed the lives of 17,000 Brits since their births in a single week in 1970, through the UK Data Service website.

These statistics are generally very trustworthy and allow you to investigate changes over a long period of time. However, they are more restrictive than data you collect yourself. To preserve the anonymity of the participants, the data collected is often aggregated so that it can only be analysed on a regional level. You will also be restricted to whichever variables the original researchers decided to investigate.

If you choose to go down this route, you should carefully examine the source of the dataset as well as what data are available to you.

Collecting your own data

Advantages and disadvantages of longitudinal studies

Like any other research design, longitudinal studies have their trade-offs: they provide a unique set of benefits, but also come with some downsides.

Longitudinal studies allow researchers to follow their subjects in real time. This means you can better establish the real sequence of events, allowing you insight into cause-and-effect relationships.

Longitudinal studies also allow repeated observations of the same individual over time. This means any changes in the outcome variable cannot be attributed to differences between individuals.

Prospective longitudinal studies eliminate the risk of recall bias, or the inability to correctly recall past events.

Longitudinal studies are time-consuming and often more expensive than other types of studies, so they require significant commitment and resources to be effective.

Since longitudinal studies repeatedly observe subjects over a period of time, any potential insights from the study can take a while to be discovered.

Attrition, which occurs when participants drop out of a study, is common in longitudinal studies and may result in invalid conclusions.

What is the difference between a longitudinal and a cross-sectional study?

How long is a longitudinal study?

Longitudinal studies can last anywhere from weeks to decades, although they tend to be at least a year long.

What is an example of a longitudinal study?

The 1970 British Cohort Study, which has collected data on the lives of 17,000 Brits since their births in 1970, is one well-known example of a longitudinal study.

What are the pros and cons of a longitudinal study?

Longitudinal studies are better to establish the correct sequence of events, identify changes over time, and provide insight into cause-and-effect relationships, but they also tend to be more expensive and time-consuming than other types of studies.

A correlational research design measures the strength and direction of a relationship between variables.
New